Finally we arrived and all fellows become divided in groups and we went to a region that all around it was strongholds. Mr Gangi the assistance of Haj Sattar sent us to strongholds. 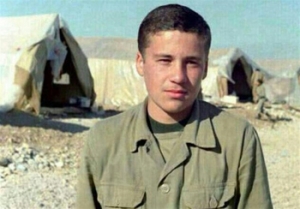 navide shahed: I couldn’t remember exactly what the date was but it was one nights of Karbala 5th operation. The fifth or sixth night. I (Ali Asqar A’ndalibi) with a number of battalion destruction sent to battalion of 155 to attend the operation as an operating force. We with our especial equipment that was belong to our duty took in the Mailer cars.

There was a road that located on the water, which was called Fish Chanel. The road exactly was under the fire of enemy. I remember we were five Mailers that moving toward and all of our battalion’s member were in these Mailers and each of the cars had an ARPG. Suddenly one of the Mailers were shot by a missile and fired. We saw with our own eyes that our fellows were firing and it was a hard and painful scene.

Finally we arrived and all fellows become divided in groups and we went to a region that all around it was strongholds. Mr Gangi the assistance of Haj Sattar sent us to strongholds and gave us a thermos of water and they recommended us not to pray outside the strongholds.

They were firing us sharply and become very sensitive and shot us with everything. I, as a responsible person for this team, was too scared and sat in a corner of the stronghold and held my head in my hands. Suddenly I saw Hussein Sepehr who was only 16 and although he was younger than me but he was too calm and there wasn’t any signs of fear in his face.

Hussein Sepehr was a virtue boy and although he was very young but he was very brave. I realized he is taking off his boots. I said: what are you doing Hussein? Didn’t you hear what the commander said? Mr. Gangi said do not pray outside the strongholds and do not take Vozou with water of your thermos because this is beverage water and until 24 hours there is no water, so you must stay with this little water.

He said: Mr. Asqar I know you are our commander but please let me pray my last Sallah. I said: you become proud of yourself! Are you God that know when is your death time? He smile at me and I still was insisting, but he didn’t accept and started his praying.

We were five and all of us pray with sitting position but he pray in front of the stronghold while he was standing. When the enemy illuminating the battle his face was very calm and beautiful. Hussein finished his praying. Mr. Ganji called us to come out of our strongholds. One of the soldiers, Farshid which was only 13 and was an innocent and pious boy, came to me and said that I have left my gun.

I became very angry because in that firing situation it wasn’t no time to wait for a person to go and bring his weapon.

Farshid went back to bring his weapon, but he delayed, for the reason that our fellow don’t become injured I sent them opposite stronghold and wait for Farshid. When Farshid returned, didn’t see us and thought we went with the battalion and he went after the battalion. I came and didn’t find Farshid and I search for him all strongholds. I became very sad because I didn’t find him so we moved forward.

The enemy was shooting us harshly. One of the soldiers, Mr. Naqdi, hit by a shell but we couldn’t help him because enemy nonstop was hitting us. We arrived very hardly behind the levee. There were a lot of injured and martyred person all around the levee. Suddenly Mr. Ganji call for a person destruction. I sent Baqer and Hussein. Hussein become very happy, in a way that he is going to a Holy ceremony.

Therefore we went to Khoramshahr and we hadn’t any news from Farshid and Hussein, and also Baqer was missing but he after 48 hours came to Kharamshahr while he was injured.

He said that he was see Hussein’s weapon behind the levee, so he defiantly became martyr. Farshid also was missing and we sent names of these two fellows as missing persons.

Now after 30 years passing from that night, the pure body of Hussein has returned and brought a baggage of sorrow and sadness with himself.