April 8, 1993 (Farvardin 20, 1372) is the day of Haj Sayyed Morteza Aviny's martyrdom. He was a skillful author, the narrator of Ravayat-e Fath the chief editor of Sura Magazine and the head of TV department of the artistic center. 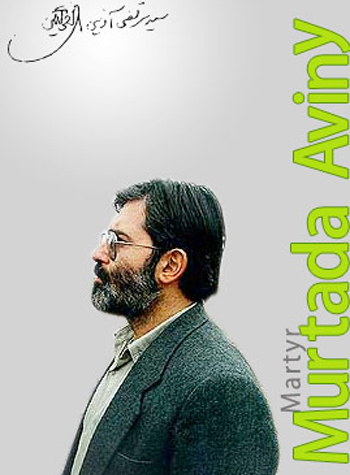 April 8, 1993 (Farvardin 20, 1372) is the day of Haj Sayyed Morteza Aviny's martyrdom. He was a skillful author, the narrator of Ravayat-e Fath (a TV program), the chief editor of Sura Magazine (an artistic and literary magazine) and the head of TV department of the artistic center. Having traveled to one of the war zones of Iran for making a new series of Ravayat-e Fath, with a group of cameramen, he became martyr due to the mines, existed in the region. He was not alone, his colleague "Mohammed Sa'eed Yazdanparast" was another martyr.

Two days before leaving for the area of Fakkeh, as an answer to the question: "Where are you leaving for?" in this way:

"You may not know where I am going, I am leaving for Fakkeh, where our combatants witnessed how the angels were delivering the martyrs' souls."

After his martyrdom, our Supreme leader, "Hazrat-e Ayatollah Khamenei" commemorated his memory as "the lord of martyr authors".

The honorable martyr (Sayyed Morteza Aviny) was born in 1947 (1326) in Shahr-e Ray. Having behind the primary education and getting his diploma, was graduated from the College of Fine Arts, Tehran university and got his M.A of architecture. He had done some studies about the literature before the Revolution.
After the Revolution triumph and the foundation of Construction Jihad commanded by Late Imam Khomeini, (in 1979) he started working in the mentioned organization. While doing so, he left for the villages, so that he could solve the villagers' problems. Having witnessed the cruelties and injustice of the previous regime left behind for these groups of people, he aimed at making films for the Construction Jihad. His first work was a TV series called "Khan Gazideh-ha". It was about the uproar caused by Khosrow Qasqaee. In the following year, he joined the television team of Construction Jihad, as one of the representatives of this organization. He  left us with "Ravayat- Fath" which was an ever lasting art taken from the Islamic combatants' bravery.

He was a director and producer of hundreds of documentary films, namely as " Khozestan's flood, the wedge of Martyrdom Jihad, Far away from the beloved, the Forgotten land of Beshagerd and Ravayat-e Fath (with 70 episodes).

Shahid Aviny worked for the Artistic center since 1988 (1367) till the end of war. Moreover; along with being the head of the television section, he was the chief editor of the Sura Magazine and the affiliated press as well.

His book called " The Magic Mirror" proved that he has some things to say in the field of cinema and also his points of view were the valuable ones in the related situation. Therefore, his opponents turned out to be wrong.

In 1992 (1371), following the Supreme leader's decree, he began to produce the new series of Ravayat-e Fath. While doing so, along with the search parties whose job was to identify the martyrs' bodies (remained there from the eight-year war), made the new series of Ravayat-e Fath and finally on April 8, 1993 (Farvardin 20, 1372) he became martyr and his endless journey began near the martyrs for whose sorrows he sang lamentations and he was waiting for a day on which he could join them.

Shahid Aviny joined his Lord Imam Hussein (Pbuh) and his leader Imam Khomeini so that no one could think of the neglecting the customs and traditions of martyrdom.

On Farvardin 22, of the same year, his honorable body was escorted by the Supreme Leader and a group of the artists. He was buried in Behesht-e Zahra Cemetery.


Speaking about Shahid Aviny's works, one can refer to the cinematic articles called ‘The Magic Mirror', the book called "A beginning of an End", another book called "The Victory Of Blood", a book which is the collection of the artistic and cultural articles, an article called "the Explanation of Light to the comment of Imam Khomeini's sonnet.

Culture & Art article, Simple Analysis, Culture or Culture of Development?, We & the Global Unique Culture, Will Theatre be alive?, A Cross with red blood, Which Gnosis?, An Uncompleted Note on Human's Identity & Reality, Poem & Madness, Secret of Sun Land.

His points of view


Shahid Sayyed Morteza Aviny considered the Western countries as a historic manifestation of Satan. He specifically (about the post-Renaissance) believed that the man's ignorance and rebellion had approached its climax through Omanism and being self-centered, the fact which would pave the ground for repentance.

Shahid Aviny considered the Islamic jurisdiction as the only legal government. Here come his words:

"The Islamic Jurisdiction is the only system which can lead to the Islamic superiority. The jurist is a person that the religious philosophy has improved in his soul. He also possesses the power to analyze the practical religious rules which are originated from the sources of truth which are Quran and tradition".

He did not considered freedom as human's right, but rather as his mission:

"Freedom is not a human right, but it is his mission toward truth and justice. However; this idea implies the negligence, which means that freedom has essentially no resistance and battle with truth, justice and commitment and in the case of manifestation of the true essence of freedom, all the quarrels and negotiations would be settled down. These negotiations are because of negligence about the true essence of freedom which is "Horriyat"."

"The real thinking is the present one which is "Reminder" (Zikr) and this latter one can not be achieved automatically. "Presence" is the exact version of "Reminder" and "Proximity" and "Negligence" are the exact "Dimension"."

Shahid Aviny was one of the serious and studious critics and at the same time the intellectual one. He constantly, criticized the superficiality of the Iranian intellectualism that appeared to be westernized. He considered those as intellectuals who tried to use the rules and the considerations with the theoretical, practical, empirical and sensational essence, taken from the logic framework and apart from the revelation, as the basis of a drastic change in mankind's life.

"An intellectual has contrastive ideas about the religion and associated traditions. He depends upon his own ideology and acquires the practical rules of his life through experiments and associated sciences. The intellectual community has basically tendency toward Western culture and has westernized thought in his mind. Even if he turns out to respect the religious principles, he will be about to be eclectic. He does not believe in the Islamic authority because, he believes in the Western democracy."

He considered the promulgation of this eclecticism as one of the goals behind the cultural invasion:

Shahid Aveeni was a true lover of the Islamic authority, a follower of his great teacher "Imam Khomeini" and the Supreme leader" Ayatollah Khamenei".

Biography of Tayyebe Vaezi, the feature martyr of Basij in 1394

The martyrdom of Morteza Avini