Martyr Sayyed Asadollah Lajevardi was born in a religious family of believers in Southern Tehran in 1935. He studied theological sciences before working as a bazaar draper. 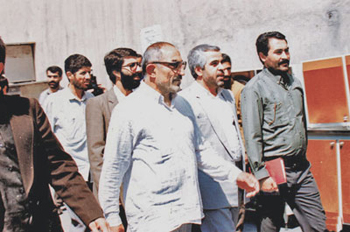 Martyr Sayyed Asadollah Lajevardi was born in a religious family of believers in Southern Tehran in 1935.

He studied theological sciences before working as a bazaar draper. Martyr Lajevardi was a religious opponent of the Shah of Iran and was arrested several times by SAVAK for his anti-dictatorship revolutionary activities. Once he was sent to Evin prison for attempting to blow up the offices of El Al (the Israeli airline) in Iran.

In 1979, with the victory of the Islamic Revolution in Iran, he was appointed the chief prosecutor of Tehran, where he played a decisive role in illuminating and repentance of many of those misled prisoners who were deceived by the anti- Revolutionary terrorist groups especially the Mujahedin-e Khalq (MKO, MEK, PMOI, NCRI...) and Forghan. Lajevardi was given the added post of warden in June 1981 after the first post-revolutionary warden of Evin, Mohammad Kachouyi, was assassinated by MKO terrorist elements. Sayyed Asadollah Lajevardi who would like better to be addressed as Haji Agha, devoted his life living in prison for the enlightenment of prisoners and to know more about their problems and their families’ difficulties. To do this he even brought his family to live there.

Martyr Lajevardi always treated the prisoners as guests and believed that the Islamic Republic had converted prisons into `rehabilitation centers` and `ideological schools`, where inmates studied Islam, learned the errors of their ways, and did penance before returning to society. As the chief warden of Evin - the main political prison in Tehran - Ladjevardi believed that more than 95% of his `guests` eventually regret their past political errors and praise of the Islamic Republic and the prison staff.

Finally Martyr Lajevardi who was like a thorn in the eyes of the enemies of the Islam and the Revolution and always neutralized their conspiracies, was assassinated by MKO terrorist elements by an Uzi submachine gun while he was, after retirement, in his tailor-shop in Tehran Bazaar.

Following the martyrdom of this brave Clear-sighted guardian of the Revolution, the MKO terrorist elements in Iran issued a statement through which they assumed responsibility for the terrorist operation.