Each nation requires some symbols for its existence and its cultural historical identity invigoration and Seyed Mojtaba Hashemi is considered a symbol of resistance among the people who has stood against enemies of Islamic country. 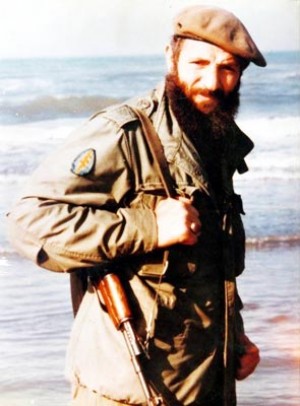 Navideshahed, Each nation requires some symbols for its existence and its cultural historical identity invigoration and Seyed Mojtaba Hashemi is considered a symbol of resistance among the people who has stood against enemies of Islamic country. During the initial days of the Islamic Revolution Victory and during time that still the government would face with basic challenges, its defensive organizations would seem to be so simple and weak in enemies eyes and they thought that they can capture Tehran within 3 days. The imperial army of Iran after Islamic Revolution and execution or escape of treacherous commanders had faced with confusion. This army had little knowledge and experience under commandership of Banisadr, former president of Iran. Still Islamic Revolutionary Corps and Basij were not so powerful. At this moment Iranian strong forces decided to defend their Islamic country and religion in a form of partisans and they performed many sacrifices in this field; so in this case the biggest mistake of enemy can be considered lack of knowledge and information about Iranians zeal that defended their Islamic country with little facilities. This power still exist among Iranians and since this power is followed with modern military weaponries has caused that Iran to be considered a stable island among the regional turbulent countries.
One of the most sensiable strategic regions of Iran was Khoramshahr and Abadan that had a meeting point with Iraq; so this place was really important for the invaders so the sacrificers of Islam under commandership of Mojtaba Hashemi realized the dangerous situation of the war and they decided to defend it; finally they were able to recapture Abadan city by doing many sacrifices in this field. Fighting history of martyr Seyed Mojtaba Hashemi dates back to the irregular conflicts in the Persian Gulf Region which is related to June 5, 1963. This respectful martyr was not a famous man until Sacred Defense Era and he himself would not try to show off. His fair humility was in a way that only martyr Chamran could distinguish his greatness.
Maybe the most important characteristic of martyr Hashemi was the ability for absorbing spectrums which could be done by no one except him. He absorbed those forces who desired to defend Islamic country to join a committee in the area 9 of Tehran that on one side they would campaign against special offenders and on the other hand they would absorb experts, clergies and authorities.
He never gave up doing activities in this field until the last moment and there is no doubt that he was a symbol of strength, intercession, sacrifice and belief for the people. He never allowed an opportunity to be provided for the enemies of Iran to invade this country.
It is clear that knowing this brilliant symbols is a sign of greatness for Iranian Islamic identity and for the people who defend their Islamic country and religion and they have a great zeal for their country. Knowing and appreciating such great persons was a motive to provide this text by Shahed Yaran.
source: shahed yaran
martyr mojtaba hashemi martyrdom navideshahed resistance
Subscribe to newsletter