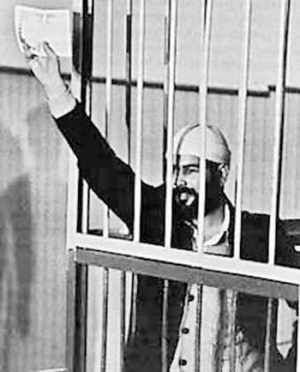 The parade of October 6

Every year the Armed Forced of Egypt in October 6 in occasion of the anniversary of passing combat units of country from Suez Canal in 1973, hold a great parade in Egypt city. Although in that year Israelis finished the October war successfully but the success of Egyptian power in broking Barlo defense in Sinai Desert cause to becoming free from invalidity of war toward Zionist army. The anniversary of this day which, is coincide with Qorban Eid, for Anvar Sadat the Egypt president was one of the important days of his life (who he in The Camp David accord sign the peace treaty and recognized Israel regime), because with parade celebrate at once two occasions, one Eid Qorban and second the victory memory of October the six.

The parade location was in a sixth rows street that was passing from a status that was near the pyramid building which, was built for memorizing anonymous martyrs. The Armed Forced for the parade had all kinds of modern weapons including American’s "M60” Tanks, Russian’s armored trucks, guns and South Korean’s cannons. This collection included other firearms which, was formed Anvar Sadat’s great army carnival.

At 10 AM viewers located in due places. In the first row behind a 1.5 meter wall "Sadat” sat with armed cloths of Senior Egyptian Supreme Commander. "Hosni Mubarak” his Vice president sat in right side and "Abu Qazale” the Secretary of Defense sat in the left side. Three days before parade, security men was checkout all guns to became certain that any bullet not embedded and controlled by metal detector all tanks, trucks and even parade’s participates.

At 12:40 which, almost the parade was finished and "Abu Qazale” was showing six Miraj jets that were flying in low height, suddenly in the front side of the status a truck stopped while it was towing a 130 millimeter gun Russian’s anti-tank. Other drivers were thinking it had a mechanical problem so they cocked their own way and passed along. A few moment later three gunmen came out of the trunk and forthrightly storm drainage the status. The forth man come out from the front seat and threw a grenade toward people but it didn’t work and the second grenade also didn’t work. The person who threw the grenades return to the trunk and took his automatic weapon and started shooting toward the status. The three other men also come out of the truck and joined him and while screaming "Long live Egypt” storming the status.

In this attack, Anvar Sadat was seriously injured and took him with military helicopter to Ma’adi hospital. Sadat was in coma and blood came out of his mouth. Bullets were hurt the left side of his chest. His knees and reins seriously hurt and before any medical action he became killed.

In medical report, which published later, his death was in 14:45 of Tuesday 14 of Mehr of 1360 because of hard shock and internal bleeding in chest and torn of the left lung and the main artery of the heart.

After announcing Sadat’s death, "Karter” the President of USA and "Menachem Begin” the prime minister of Zionism regime and other similar people surprisingly lamented.

In following of Sadat’s terror evet, security officials of Egypt by the command of Hosni Mubarak arrested 650 Muslims who was involved in Sadat’s murder. This event brought such a great horror for Egypt regime and especially for "Mubarak” who he go far from Sadat’s political method and accepted to visit "Khaled Mohi Alddin” the leader progressive national unity party. This party hadn’t any member in Egypt Perelman and one month before Sadat’s terror, in order to religious and political suppression of dissent, many members of this party were arrested by Sadat’s order.

Following the assassination of Sadat, 24 Egyptian Muslims had arrested and took them to the military court while they were in a metal cage.

Khalid Islambouli: I killed the Pharaoh

Lieutenant Khalid Ahmad Shouqi Islambouli, a man who was accused leading Anvar Sadat’s terror, in beginning of his first trail while was holding Qur’an in his hand and arrested in a cage was screaming Allah o Akbar and added: People! I killed Pharaoh to verify the ideal of Islam. Other accused also encouraged him with saying Allah Akbar.

In the trail an accuses with name of "Abdolsalam Faraj” mentioned as a master-mind and designer of the Sadat’s terror. He was a young engineer who wrote a book about Islamic fundamentalism and visited Khalid one week before Sadat’s terror and was consulate with him.

Trail courts was hold several days and finally after five months the warrant issues of accuses is as below:

The death sentence of these five Muslim fighters was executed in morning of Thursday 28th of Farvardin of 1361.

The Egyptian regime denies to give these five persons’ body to their family and buried them secretly in an unknown cemetery. Moreover, their family while were congratulating to each other announced that there are not accepting any condolence because their children are martyrs.

Lieutenant Khalid Ahmad Shouqi Islambouli was the leader of Anvar Sadat’s execution’s group. He was born in region of "Malvi” a state of Alseyd of Egypt in 1957. Khalid had one brother and four sisters. His father, Ahmad Shouqi, was lawyer of a company and his mother name was Qadriya Ali Yousef. Islambouli’s family firstly were educated and were aware of their time and secondly they were fighters. Khalid also after failing the pilot exam, joined to School of Artillery and graduated in 1978 with high scores. He after graduation introduce to artillery of "Kastib” and started his work.

His commute to mosque of "Ansar al- Mohammadiye” cause to calling him up from Administration of military data and interrogated him. "Being dangerous” was the result of this interrogation that recorded in his file. He in this moment become familiar with Islamic community organization and had friendly relationship with Abdolsalam Faraj. Abdolsalam Faraj said to Khalid: "in Islamic countries especially in Egypt the rulers are pagans (Koffar) and it won’t become reform unless with an Islamic government. The recent rulers are like Mongol governors and the black era that Egypt is in it is similar to Mongol Era; a dark time that without falling of pagan regime won’t end up.”

In Wednesday 23th of September in 1981, first lieutenant Khalid Islambouli was summoned from commander’s office. In this summation Major Mokaram Abdol’al communicated the issue of attending in parade of 6th of October in front of Anvar Sadat. Based on this command Khalid in addition to attending in parade must commanded 12 crane that carrying 130 millimeter’s canons Of course Khalid at first refuse to attend to this parade but after he realized he couldn’t disobey from his commander attended the parade which, it ended up with execution of Anvar Sadat by him and his followers.

I Killed the Pharaoh of Egypt