Martyr Hussain Khalatbari is a national General and one of the brilliant stars in the history of the Islamic Revolution and the Sacred Defense, an old retired pilot of the Iran Army Air Force said. 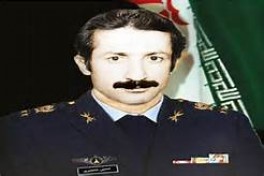 Navideshahed: Here is an interview on the eve of the anniversary martyrdom of Gen. Hussain Khalatbari with an old retired pilot of Iran Army Air Force "Gen. Hussain Cheetforoush".
Martyr Khalatbari is a national General of our country. He was a hero who had taken the responsibility of protecting the sea among the Persian Gulf and Bushehr station, he was one the skilled pilots in this air station. He was too brave, Gen. Cheetforoush added.
On the eve of the anniversary martyrdom of martyr Khalatbari, he mention that: when the people come together and celebrate for new year there are many military forces who protect our borders to creat more safety for our country. Martyr Khalatbari martyred in Nowruz holidays.
If we want to know the western countries better, we shall study their behaviours to the Iranian Nation, he said.
Martyr Khalatbari played an important role during the Sacred Defense periods, finally he was martyred in the defense of our country, Gen. Cheetforoush mentioned.
Message End/
Subscribe to newsletter

The Martyrdom of Fatima – Poem