A flight up to the height

He was born in a faithful family of Dogahe village of Roodbar town. His Father was a hardworker and well-known shopkeeper alsoan eulogist of the household of the prophet of Islam, who was seeking afterlife rewards. 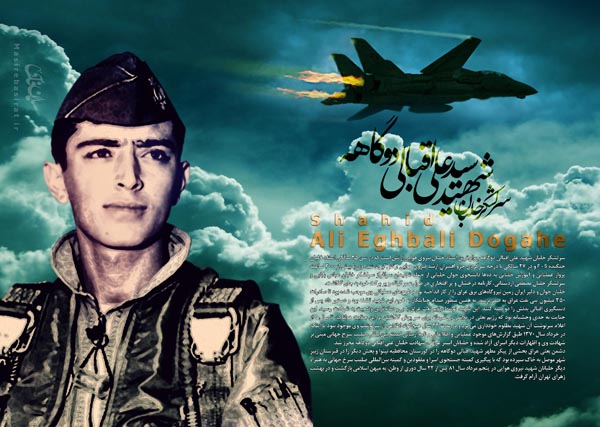 Major general pilot martyr seyyed Ali Eghbali Dogahe is a paragon of eight years of sacred defence and one of the most skillful devotee pilots of Air force of Islamic republic of Iran who was martyred at the end of the first month of imposed war of Iraq aginst Iran. He was born in a faithful family of Dogahe village of Roodbar town. His Father was a hardworker and well-known shopkeeper alsoan eulogist of the household of the prophet of Islam, who was seeking afterlife rewards. Ali was brought up in such a religious family and soon it cleared that he is a studious and intelligent boy also interested in technical and scientific affairs.

He was so generous that he would help his classmates by holding make up classes in summers for teaching holy Quran and other lessons. Soon with clarification of his various talents he started training of pilotage course and then for completion of his education he was sent to America and after graduation with excellent marks he returned to Iran.

Then in each step of his duty in Air force He was registered as the youngest lieutenant, Captain, and Major also the youngest instructor of pilotage of air force in Iran.air force performance in collaboration with iranian revolotioacy nation in the victory of Islamic revolution was prominewt and the highlight of this collabration was historical visit and covenant of high ranking commander of air force with imam khomini(s.a) three days befor revolution as a turning point which demoralized the army of the shah and facilitating the victory of revolutia With the victory of Islamic revolution Martyr Eghbali in accompany with the new regime endeavored to stablish a new air force organization proportionate to Islamic Values of society an airforce with high modilization of it's personnel considering renovation and reorganization of arny that had defensive performance of safeguarding teritory of iran specially in war fronts and befor that trouble making regions of kurdestan and defeated tratior and autirevolutiary enemies successfully and since the first days of outbreak of war martyr eghbali who could work in design and planning of air raids or commandership centers of air force in spite of his rank, position and experiences, he promptly and devotedly joined operational units of air force for direct battle with the enemy and didn't leave even a relative security for himself.

At the end of the first day of war, he in a glorious mission of the Flight No 140 was one of strong wings of operations and proved that saddam's imagination of Iranian weaknesses had been quite wrong.

In confrontation with the enemy he with his rigour presence indicated that he was a fast flying eagle and indeed he had prepared himself for severe wartimes, however, with his God seeking moralities he never neglected spiritual and divine rituals and was strong inded in actions and prayers so that he gave another explanation of martyrdom to the freemen. The Josef of martyrs of Iranian air force who was famous for his handsome appearance and characters was finally martyred in an attack to Alaghreh Base of Iraq when he had an emergency landing and was captivate and martyred tragicly by Iraqi troops so that he presented another outstanding martyr of airforce to the history of Iran. Seyyed Ali Eghbali Dogahe the proud bird of ever in height flyed up to the eternity and met his beloved in the paradise. May the blessing of God be upon him and his fame will endure for ever.

How was the Youngest Pilot of Iranian Army Killed?