With reports of NAVID SHAHED captain Mojtaba (Shahryar) Yadollahi, the young and brave ranger of Islamic Republic of Iran Army, was borne in 31th Farvardin of 1370 in Shahriyar (Tehran province) and in the evening of 21th of Farvardin 1395 in a hard battle in Aleppo’s countryside became martyr while he was commander of a group of 40 fighting martyrdom-seeking and they were fighting against terrorists of Isis. 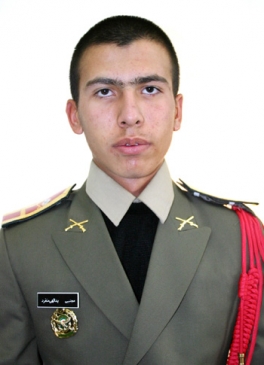 With reports of NAVID SHAHED captain Mojtaba (Shahryar) Yadollahi, the young and brave ranger of Islamic Republic of Iran Army, was borne in 31th Farvardin of 1370 in Shahriyar (Tehran province) and in the evening of 21th of Farvardin 1395 in a hard battle in Aleppo’s countryside became martyr while he was commander of a group of 40 fighting martyrdom-seeking and they were fighting against terrorists of Isis.

All the joys of a Defender of Shrine’s family

In these days, the martyr’s mother also is managing weeding ceremony of Mustafa, the second son of family. Mr. Mustafa similarly is in Army and working in Air Force. Last year they wanted to prepare Mojtaba’s marriage but he said to his mother: "Pleas wait for three months, when I came back from Syria.”

However all joys of this revolutionary and pious family are not these, one month ago they were hosting from Haj Qasem Soleimani. Major-General Soleimani said: our Army Rangers show their brevity. We are grateful of them. 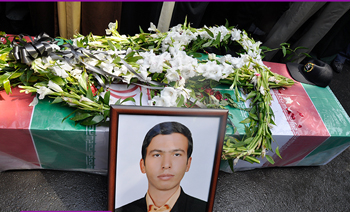 The special captain of Islamic Republic of Iran Army, was volunteer for martyrdom

Haj Ali Yadollahi Monfared is retired teacher of Shahriyar and he is one of confidantes of city. He narrated about his son’s sacrifice and with a revolutionary mood said: Defenders of Shrine went to battles that enemy couldn’t attach our doctrinal and geographic borders. Martyrs were heads of perfection and until we were with them we didn’t realized their high moralities, but when they became martyr it seems we are looking at a mountaintop from hillside.

Mr. Mojtaba in his childhood had features that shows his potential through serving for Islam’s Army. I sent him to gymnastic when he was 5 years, he was early riser, responsible and brave, and always pray his Sallah. When he became a teenager he attend the army with interest and after he graduated from college, he started his serving in special Army force.

The father called his martyr son a martyrdom-seeking and continued: after his graduation, his first service location was Iranshahr, the city that the Supreme Leader was exile in there. He was said that because I’m single they sent me to IranShahr. Last year, in these same days, he got the agreement of his commander and was sent to Syria. 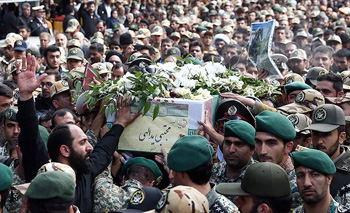 Both martyrdom of Mojtaba and also serving of Mustafa in army are one of well-mannered things.

He says: three or four month ago I went to Syria, I saw terrorists’ bullets in the 30 meters to Shrine of Zeinab (a.s). In there I realized the greatness of Defenders Shrine’s martyrs and I am happy these bloods are shed in the path of province (Velayat) and Ahlolbeit (a.s), and they made away the enemy from 500 kilometers from the shrine and God willing the resistance front would destroy all enemies from Islamic lands.

Making free (of Aleppo) it was a double joy for all of us and thanks God we saw the result. The Prime Minister of Israel was said to USA: lest you do not support us, and if you cut your support we would destroy. These Isis and AlNosrah are sticks of colonization and are result of ignorance of Arab leaders. The foreign minister of USA confessed that we wanted to take Middle East with Sudia’s Dollars but resistance exile didn’t let us.

Haj Ali emphasized: we had and have a promise with Velayat that, God willing, we could fulfill to our promise. Defenders of Shrine put forth their dedication and not let history repeated. Mojtaba was the fruit of our life but this martyrdom also is divine mercy. We heard the voice of an oppressed and Defenders of Shrine answer to this request. Both martyrdom of Mojtaba and also serving of Mustafa in army are one of well-mannered things and now because heart of the Supreme Leader is satisfy, we are happy as well. Our martyrs didn’t give the frontline, didn’t give Velayat, didn’t give Islam… 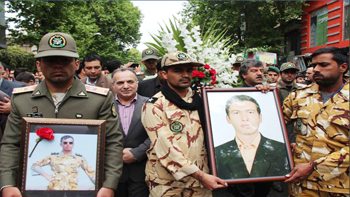 All things that took Mojtaba to Syria

The martyr’s honorable mother in a short sentence but with deep meaning said: Mr. Mojtaba traded this world life in sake of AhlolBeit’s (a.s) love. Last year in Nouruz’s night I told to Mojtaba: Dear, at least be with us in Nouruz and then leave. He answered me: Mother! In all my life you say to me about Zeinab (a.s) and Imam Hussein’s (a.s) children, now how could you answer to Zeinab (a.s)? My dispatch is answering to Vellayat” and finally he took my agreement. One day I went with Mojtaba to funeral of a Defender of Shrine, in there I said to myself I must become prepare for Mojtaba’s martyrdom…

Imam Zaman (PUH) and Rasullolah (a.s) are proud of you

Mr. Mustafa Yadollahi, the only son of family and the elder brother of Mojtaba graduated from Cadet and now is working for NAHAJA. He also had worth full words about his brother, he said: I have three years of my younger brother but we were too close that nobody realized to our age distance. When he was in Syria, we spoke in phone a long time and several times our conversation become distracted but we still continue.

Mojtaba encouraged me to attend to Army. In exercising and morality I learn from him and now he is the first martyr of Islamic Republic of Iran. He was a commander who didn’t give up in fighting with Isis and finally became martyr with a mortar and he in his last moments with breaking his stronghold prevented Isis become close to his corps…

The martyr’s brother said: the favorite character of Mojtaba without no doubt was the Supreme Leader and his favorite martyr was martyr Sayad Shirazi… 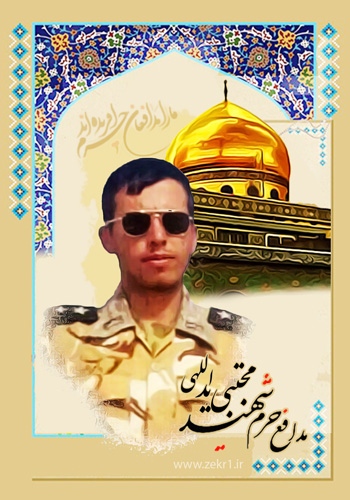 Amir PourDastan in martyr’s funeral announced: Mojtaba you did a thing that not only we are proud of you but also Imam Zaman (PUH) and Rasullolah (a.s) are proud of you. And martyr Yadollahi’s prediction came true.