his high school in Tonokabon and after that went to Tehran. He after his trainings in Airforce deployed to Isfahan. Martyr Shiroudi before Islamic Revolution had religious activities against Pahlavi’s regime 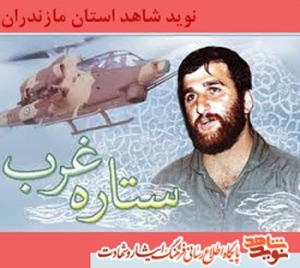 NAVID SHAHED of Mazandaran: the proud commander of Islamic Army, Brigadier General martyr pilot Ali Akbar Shiroudi was born in Shiroud of Tonokabon and he passed his high school in Tonokabon and after that went to Tehran. He after his trainings in Airforce deployed to Isfahan. Martyr Shiroudi before Islamic Revolution had religious activities against Pahlavi’s regime.

Martyr Shiroudi after his high school in 1351 entered to the army and finished primary pilot course in Tehran and then completed Kobra Helicopter’s course in Isfahan and graduated with degree of Assistant Lieutenant. Shiroudi recorded the world’s largest flight hours.

He 360 times encounter with death’s danger for protecting from Islam and his land and 300 bullets was hit to his helicopter and with he with 40 accidents that attacked to the enemy never refuse his serving to the country. Moreover he in hunting enemies’ tanks was unrivaled.

He finally after targeting four Iraqi tanks, while he was hitting by enemy’s bullets, finished his final mission by attacking to a tank which, was hitting his helicopter with a muscle. In this attack, Iraq with 250 tanks and with supporting of shell, mortar and armed fighters sent its army to Sar Pol Zahab for occupying "Bazi Deraz” heights. In this situation the last flight of the bravest pilot of the world, while marked that, he fight till end of his life bravely and courageously. He with his martyrdom got the title of the most famous pilot of the world.

Because of his courage and bravery in seven months improved from Assistant Lieutenant to Captain Rank. He with command of Air Force Command got encouraging ranks and improved from Assistant Lieutenant to Captain Rank. However he wrote a letter to Air Force commander in 9th of Mehr of 1359: "I am the pilot of Air Force of Kermanshah’s base and I attended to all wars for protecting from Islam and Islamic country and I hadn’t any purpose except this, becaus I attend to war by the command of the Leader. So I request to take back my incentives and return me to my previous rank.”

The experts named him the most famous World’s Pilot which, martyr General Falahi the Joint Chiefs of Staff of Army wrote about him: "he was the rescuer of the west of Iran, the light of Ariya’s heights, Bazi Deraz, Meymek, Dasht Zahab and Abuzar’s base. He changed impossible points to possibilities. He was the person who when I gave the news of his martyrdom to Imam Khomeini, he said about him: "He is blessed.”

The body of martyr Shiroudi after a glorious funeral buried in Shiroud’s village in Tonocabon. Martyr Shiroudi had two child with names of A’dele and Abuzar who when their father became martyr they were 4 years and 1 years old.