Martyr "Agharebparast" according to the Supreme Leader 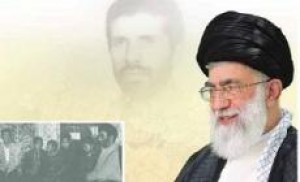 Muhammad Jahanara and other youth resisted thirty-five days against the invading forces from Iraq - An Iraqi armored forces equipped with a special type of ninety artillery force, which was set in Khorram-shahr on days and nights. As bombarding rockets on Baghdad, mortars and heavy bombs were regularly thrown at the homes of people in Khorramshahr.

However, the strength of our youth, thirty-five days, but Baghdad surrendered in three days! Thou Iranian Nation! Feel Proud of your youth and of your warriors. Then when they wanted to take over Khorramshahr, Guardian Corps and Army and Basij again with a much smaller force compared to Iraqi troops, surrounded Khorramshahr and took its control in their hands, and approximately fifteen thousand Iraqis were captured in one or two days. Our eight-year war is a strange story. I wonder why some people are indifferent to present the lessons achieved during the imposed war.

Major General Martyr Hassan Agharebparast in May 1320 was born in a religious family in the city of Isfahan ... successfully passed the three-year period cadet alongside friends like martyr Kolah-duz. His Good communication with committed people in army caused an increasing military stability after the Islamic Republic revolution. After revolution, Agharebparast, regenerated, and tried to strengthen Iran's Army.

In Early 1362, after two years of service in the Second Department of the Army, returned again to the south and continued to work in the armored divisions92... Twenty-fifth day of September, 1363, when Shahid Hassan Arqab visited the Majnoon islands along with some of the leaders, was his final step in the right, on the south side of Iran. Moments later, a mortar landed and poured his red blood on earth... "

S: The official site of the martyrs of the islamic world
Related News

US, Soviets, and regional reactionaries fought against us for 8 years, we defeated them all: Ayatollah Khamenei