Martyr Nosrat Zad in a courage action after saying about his will about his injuring place and his prison requested for firing. 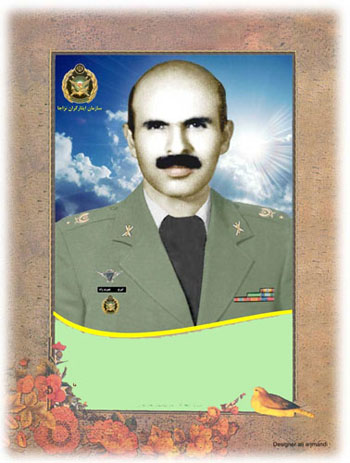 NAVID SHAHED: counterrevolution attacked to Sanandaj’s base in Farvardin of 1358 and the base blockade completely. After this event they gradually started controlling the city. The Army was not allow to struggle with them and the tact and courage of martyr Nosrat Zad (the commander of Brigade First Division) was prevent the base from falling.

Martyr Nosrat Zad took his soldiers to the city with an especial deployment and cross the city with a cross - country exercising and sometimes destroyed the counterrevolution’s strongholds and they not dare to do anything. Finally Nosrat Zad attract attention of Members of the Defense Commission in northern of Sanandaj and established a commander base and took the personnel out of the base. However the action was in hands of Nosrat Zad who had a high revolutionary and military mood.
With insisting of colonel Sadri finally Shiraz’s Airborne Battalion reach to Sanandaj and settled in the airport. Based on officials’ program of army this battalion must passed Sanandaj and go to Saqez which, with counterrevolution’s action with taking students to the city this program became failed. But the battalion with commanding of Colonel Nosrat Zad after crossing the city, continued its way from direction of Qeshlagh’s Dam.

The counterrevolution elements who hated this sacrifice and brave Iranian soldier, forced him to read his will from the radio for his fellows. He said some words about Islam, faith and homeland and then became martyr by counterrevolutions in Ordibehesht the first in 1359.

The last massage of the martyr

Martyr Nosrat Zad said in his massage:” I am the colonel of the base, Iraj Nosrat Zad, in last moments of my military life I announced my last words to my fellows: My life for Iran! Long live the Islamic Republic of Iran’s Army! Long live the first brigade commander of Sanandaj! May God protect you! Nosrat Zad.” Martyr Nosrat Zad in a brave action after saying his will requested Artillery fire for that place that he was captured.

The martyrdom of 102 military with their commanders

In event of 31th of 1359, the martyr General Iraj Nosrat Zad with 102 militaries including martyr Muhammad Jalili and Major Mustafa Yadullahi became martyrdom and their pure bodies was buried all together.

Martyr Iraj Nosrat Zad was born in 3th of Mordad of 1312 in Gilan. He attended to military school when was 16 and after finishing his high school went to military university. After passing the courses he went to Shiraz and after he passed armored period and airborne of Shiraz he started his work. He passed all practical and martial courses of army such as Command School, Defense, Ranger, Skydiving and Coach Skip. Finally he in 31th of Farvardin of 1358 became martyr after suffering tortures by counterrevolution.
Related News