The Martyrdom that shook the Muslim World 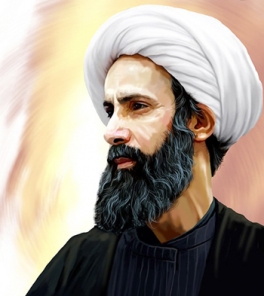 I realise sitting at my desk that few of you still, ever heard of Sheikh al-Nimr and the fierce opposition he offered the Wahhabist regime of Saudi Arabia … such is the nature of our western governments’ alliance with the kingdom; but I will nevertheless tell you of this man, who, by the sheer strength of his convictions shook a people into resistance.

It is resistance, justice and freedom Sheikh al-Nimr called for from the height of his pulpit. It is social cohesion and religious pluralism he demanded be restored over the Hijaz so that the fascist imprint of Wahhabism could be disappeared and the Islamic world freed once more.

And yet the world chose to see in his defiance the rebellion of Shia Islam. It is not rebellion Sheikk al-Nimr spoke, but allegiance and restoration. His stand may have been that of a Shia of Ali, his allegiance may have been indeed to al-Muhammad (the progeny of the Prophet Muhammad) but his message was universal: that people have a right to resist oppression, and that people have a right to political self-determination.

Isn’t it what democracy stands for? Isn’t it what the Voltaire, Robespierre and the Abraham Lincoln of the West have lobbied for, bled for and revolutionned for across the centuries?

This is the man Saudi Arabia brutally murdered. This is the man Wahhabism took a sword to and beheaded in a public square never to return his body to be buried … there are crimes indeed which make one shudder. There are crimes which speak too loudly of the abomination that sustain them for anyone to tolerate it any longer.

Saudi Arabia is the abomination the world should learn to denounce in righteous outrage. If ever the world needed to grand-stand on something then I would say that grand-standing against Saudi Arabia it should.

You have heard I’m certain the argument that Sheikh al-Nimr was a dangerous dissident whose movement was fomenting an armed insurrection against Riyadh. Qatif you ought to know has always sat in peaceful resistance … and if a weapon was drawn it is that of the truth.

Of course, from a Wahhabist perspective Truth is a weapon of mass destruction.

As a people remember the blood of its most revered cleric, a people also mourn those souls who languish still in the prison of al-Saud … how many of Qatif youth sit in oppression and torture for they were born in allegiance to al-Muhammad?

How thick the silence of nations before Saudi Arabia’s genocidal campaign against religious pluralism. Those your governments call friends would hang you for speaking a loyalty or a prayer different from their own.

Do you not see in the name of the kingdom the imprint of slavery? What other country in the world has claimed to sit in ownership of a nation? Saudi Arabia will be remembered as epitome of theofascism.

The very premise of al-Saud’s power is anchored in absolutism and enslavement, exclusion and exceptionalism, nepotism and tyranny, fear and bloodshed. Sheikh al-Nimr spoke of another allegiance altogether. He spoke those words that once upon a time under the sky of the Hejaz reached to the Heavens and melted hearts in submission.

It is such Truth, the likes of which cannot be denied the kingdom would like to disappear and forever silence!

But for every fallen martyr, for every swing of the sword, martyrdom came to anchor resistance deeper still. For those who follow, Resistance is no longer a choice, but a way to be – the only declaration of faith worth uttering.

It was Sheikh al-Nimr who said: "Either we live on this land as free men, or die and be buried as pious men. We have no other choice.”

And so today, on the anniversary of Sheikh al-Nimr’s martyrdom I would like to take a minute to commemorate a life spent in service of the truth. There is strength and beauty in our clerics’ righteous stance. There are lessons to be drawn from such unbending free men.

There is eternity is the cry of the oppressed for it echoes of another cry, another leader of men, let out in the plain of Karbala 14 centuries ago.

Roll your eyes all you want but it is Liberation Imam Hussain taught his followers … It is liberation Shia Islam has since stood for.