Sayyid Mustafa Khomeini, the eldest son of Imam Khomeini was born on the 12th of December 1930. From his early childhood, he was brought up under the influence of his family life environment, which was a religious and scientific one 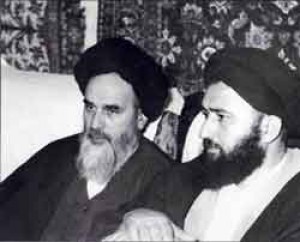 Navideshahed:
Sayyid Mustafa Khomeini, the eldest son of Imam Khomeini was born on the 12th of December 1930. From his early childhood, he was brought up under the influence of his family life environment, which was a religious and scientific one. He began his early education from the local schools. After having learned the primary school teachings, he entered the Qom Theological Center and engaged in acquiring the theological sciences. He soon proved his genius at the Qom Theological Center and surpassed his classmates. After passing the preliminary, Sath, and Kharij course, he attained the ijtihad degree at the age of 27. While he studied and taught, he also began writing. He continued writing for the rest of his life. He has also left behind numerous works.

Being influenced by the Qom Theological Center's environment and the characteristic and viewpoints of Imam Khomeini, Sayyid Mustafa embarked on political activities, too. He took part actively in Imam Khomeini's movements at every stage. He had an active rule during the movement in Iran, exile in Turkey, and the continuation of the exile in Iraq until the 22nd of October 1977, when he passed away suspiciously. His death was also an undeniable assistance to the increasing expansion of the Islamic movement. After his passing, he was referred to asthe Morning Star of the Revolution, the Forerunner of the Revolution, and the Dawn of the Revolution.
Hajj Agha Mustafa, who was the closest person to Imam Khomeini, was trustworthy and made sure Imam Khomeini was in touch with far-reaching and complicated parts of the Islamic movement in Iran and different parts of the world. He had many viewpoints as to the type and manner of the struggle with the government and stood firm during the ups and downs of the political activities, particularly in Iraq.

The Imam always considered Hajj Sayyid Mustafa as a trustworthy religious authority for the future of Islam. He was an authentic jurist and a steadfast thinker. He was sharp minded, innovative, a master of philosophy, intuitive, and interpreted the Holy Qur'an from new standpoints. Although the unjust manner of the oppressors made his works inaccessible, his remaining works are evidence of his great scientific mind and genius.
source: Imam Khomeini.ir
Tags:
imam khomeini ، mustafa khomeini ، navideshahed ، issar and martyrdom
Subscribe to newsletter